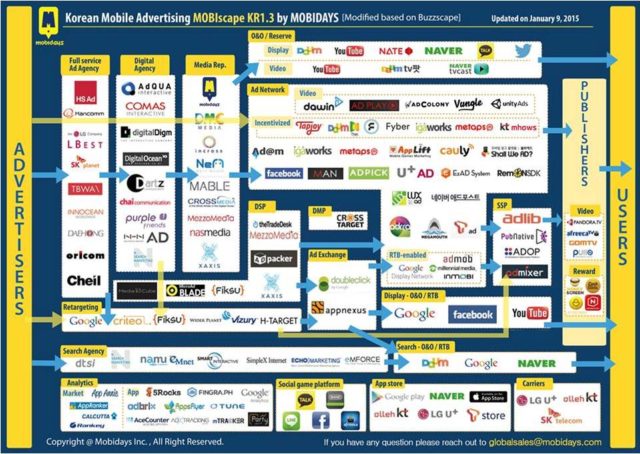 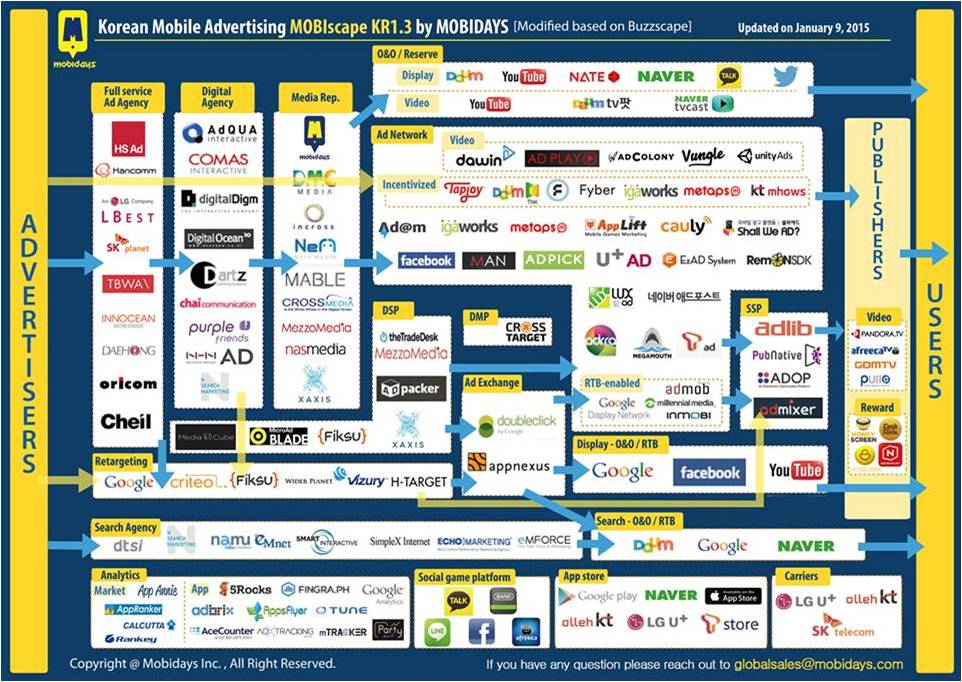 1) Display – O&O/Reserve
Owned & Operated Reservation Inventories (O&O/Reserve) based on portals and messenger services accessed by a large group of users such as Naver, Daum, or Kakaotalk formulate the biggest market in the Korean mobile display advertisements market. Most of the purchases are completed through the display agencies and the RTB(Real Time Bidding) purchases are usually not allowed. (In the case of YouTube, some inventories can be purchased through the RTB method.)

2) Ad network
The Ad network is comprised of Incentivized, Video, and RTB-enabled. The Incentivized highlighted players in groups which provide incentives(game items, cyber money etc) to users who viewed the advertisements.

Korean companies are showing strength in the Ad network. Korean companies which provide the Ad network can be largely categorized into three parts. Firstly, there are ‘Ad@m’ from the DaumKakao portal service company and ‘Naver AdPost’ from Naver. Next, there are ‘T ad’ of the SK telecom telecommunication company, ‘U+ Ad’ of LG U+, and ‘KT mhows’ of KT. Thirdly, there are ‘Cauly’ of the Yello Digital mobile venture business, and ‘shall we ad’ of Shall We Ad.

3) Reward App
One cannot discuss about the mobile advertisement market in Korea without mentioning the Reward Ads. The appearance of the Reward App in 2012 brought changes to the Korean mobile advertisement market within which only banner and research advertisements existed until then. ‘Latte Screen’ of App Disco, ‘Honey Screen’ of Buzzvil, ‘Cash Slide’ of NBT Partners, ‘Nexon Play’ of Nexon etc are all mediums that expose full-page advertisements using smart phone lock screens and provide incentives when users perform a specfic act(Click, App install etc). They either land advertisements autonomously within their medium or through cooperation with the Ad network, SSP etc.

4) DSP
The DSP stands for ‘Demand Side Platform’ and it is an advertisement platform developed in favor of the advertisers. As the Korean mobile advertisement market continues to grow, the number of foreign companies with technical skills entering the Korean market are increasing.

5) DMP, Retargeting
DMP stands for Data Management Platform and it manages and processes big data sets related with advertisements then provide insightful information to advertisers(or advertising agencies), publishers etc. In Korea, Onnuri DMC launched the advertisement platform ‘Cross Target’ and holds a place in the DMP area. Morever, Onnuri DMC launched a retargeting service ‘H-target’ last May, together with Nas Media(Media Rep.) of the KT group. H-target is a service synchronized with ‘Admixer’ of Nas Media.