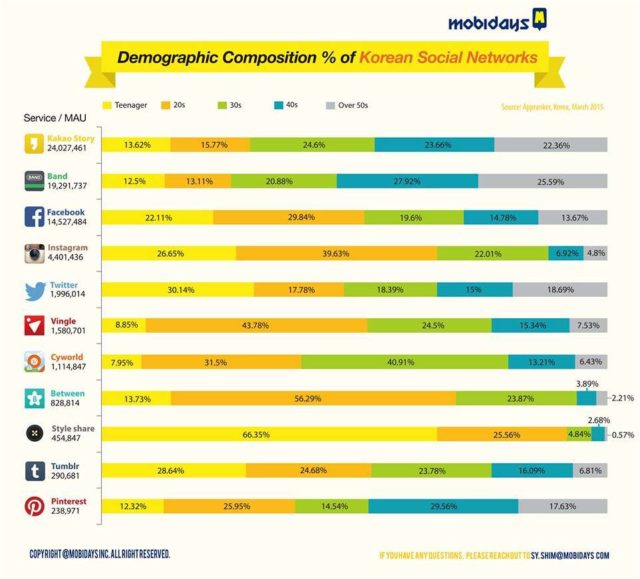 SNS stands for Social Networking Service, and refers to an online platform that provides free communication, information sharing, and expansion of personal connections to form and strengthen social relationships (source = Wikipedia). SNS started with an online basis and has developed rapidly with the introduction of smartphones. As wireless internet infrastructures were expanded, it became possible for smartphone users to access SNS easily whenever they wanted to. Moreover, the built-in cameras of smartphones allowed users to express their situations and feelings using multimedia such as pictures and videos.

Various SNS are operated in Korea and Mobidays examined the age groups of SNS users, using the data obtained through App Ranker. 11 SNS Apps that had over 100 thousand MAU(Monthly Active Users) in March 2015 were selected and the usage ratio of each service per teens, 20s, 30s, 40s, 50s and over were examined. 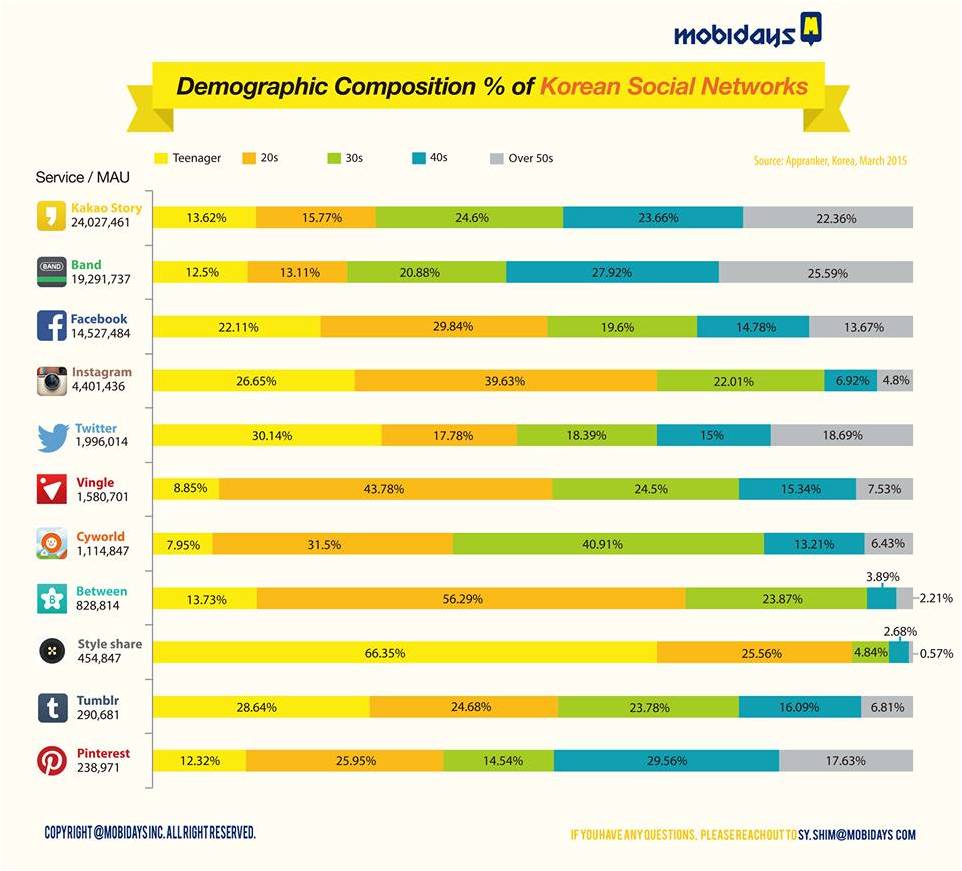 Cyworld for 30s, Between for 20s, and StyleShare for teens
Cyworld is a domestic SNS that was first launched in 1999 and gained great popularity among teens~20s during the early 2000s through their mini homepages and acorns (cyber money used in Cyworld). In 2012, Cyworld launched a mobile app and attempted to move their PC basis services to mobiles. Cyworld wasn’t able to succeed greatly in the mobile market due to the rise of foreign SNS such as Facebook and Twitter, but is still receiving continuous love from its users and its March MAU was at 1,114,847. There were especially a high number of 30s users who have used Cyworld actively in the early 2000s.

Between is a closed couple SNS for couples. Couples can use Between to chat with one another, share pictures, and to check their anniversaries. It is gaining popularity in the East Asian market focusing in Korea, Japan, Taiwan, and China. Between’s March MAU was at 828,814 and 56.29% were users in their 20s, revealing that it is a SNS most used by couples in their 20s.

StyleShare is a SNS that allows users to share information with other users sharing an interest in fashion. It is a service that mainly targets females sensitive to fashion and trends. Its March MAU showed that 88.56% were female users and 11.44% were male users. In terms of age groups, teens ranked the highest at 66.53% and it was observed that StyleShare was most loved my teen female users.