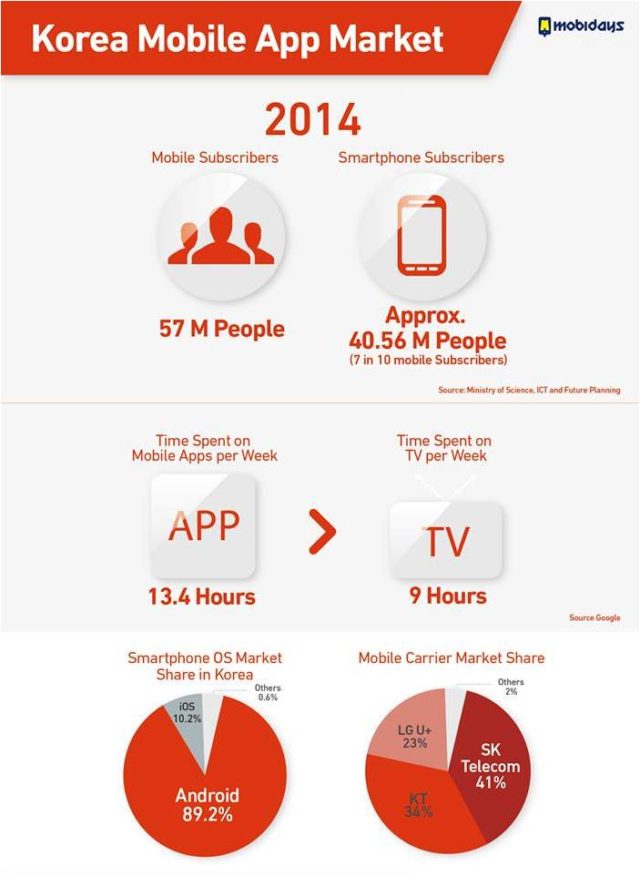 Until 2014, the number of people who have signed mobile phone plan has reached over 57,000,000. In addition, 70% of these people are currently using smartphone plans. It appears that the majority of the smartphone users lead their mobile lives through mobile applications. According to the research that Jonathan Alferness, in charge of Google Inc.’s global advertisement, has published on February, 2015, the time spent by Korean smartphone users on mobile Apps is estimated to be 13.4 hours per week. This is outstandingly higher than the weekly time spent on TV (9 hours). As various services such as games, music streaming and shopping are emerging as mobile apps, smartphone users spend more and more time on their mobile apps.

Recently, as the mobile app market grows, variety of services such as games are trying to expand into Chinese, Japanese, and even other global markets. Since the App market is a hub through which these apps are being marketed, it is necessary for App developers to register their applications to App markets. Every App market within different countries has its distinct feature, so that, if a company is preparing to launch a mobile App service, the research on the specific App market should be proceeded.

As a result, the Mobile Advertisement Laboratory, starting from Korean App market, is going to take a closer look at the App markets of major Asian countries including China and Japan.

Apple’s App Store and Google’s Google Play are in operation since 2008 when smartphones started emerging and have already secured diverse contents in the market. In addition, as those App markets are pre-installed in smartphones, most of the users use App Store and Google Play as their major markets. As it can be shown in the domestic App Market’s content revenue, Google’s Google Play occupies 51.8% and Apple’s App Store has share of 31.33% among the total content sales revenue, while domestic App market has only 13% which is far less than those of foreign App markets. (Source: Korean Mobile Internet Industry Association, 2014: Speculation on Mobile Internet Industry)

To register an app on Google Play and Apple App Store, an account for each market has to be created. In case of Google Play, it is required to pay $25 as an account set-up fee, while $99 of an annual membership fee is mandatory for Apple App Store. For revenue, when developers sell paid app or users make in-app purchases, developers earn 70% of the total revenue as their net income, excluding 30% which is the commission fee for App markets. (The developers could think the App market account set-up fee and 30% commission to be harsh.) However, since Google Play and Apple App store are securing a significant number of users as global App markets and it is more comfortable to offering mobile services to various countries through these markets, the developers mandatorily register theirs apps to each App markets.

Moreover, it is possible for the developers to manage their apps more handy by utilizing the payment method that Google and Apple offers without developing their own. (Reference: It is impossible to use another company’s in-app payment system within Google Play and Apple App Store)

2) Naver App Store, moving from PC to Mobile
In 2012, Naver launched Naver App Store in which people can download Android-based apps. It seems little late in trend compared to Google or Apple, but with its lower sales commission fee and promotion through Naver, Naver App Store is putting efforts in gaining developers and users.

When developers sell paid apps or users make in-app purchases in Naver App Store, the developers can earn 80% as their sales income. Specifically, Naver returns 10% of the payment to the users in a form of mileage only for the apps which are eligible for Naver IAP (In App Purchase). (In case of Naver App Store, developers can use another company’s in-app payment system.)

The most outstanding characteristics of Naver App Store is that it is possible to utilize Naver after being registered in the App market. When an app which has been registered for Naver App Store is selected as a ‘Top App’ or ‘Best App’, it can be listed on the main page of Naver website or App Store page for recommendation to the users. Also, when an user searches the app or a keyword related to the app on Naver, it also can be exposed to the user, advertising the app to many Naver users.

Naver App Store offers a variety of advantages to the developers, but, for the users, it is yet comfortable to use. Since Naver App Store is not pre-installed in smartphones and Google does not allow another independent App Market to be used other than Google Play, it is inevitable for the users to go through a series of complicated processes to use Naver App Store. (Visit Naver Webpage -> Download Naver App Store -> Check ‘Unknown Distributors’) Therefore, Naver is making up some counter plan for it, such as offering a Naver mileage to the users who install Naver App Store.

3) Three into One: T-Store, Olleh Market and U+ Store
The three largest Mobile carriers in Korea, SK Telecom, KT and LG U+ are managing the App Stores, T-Store, Olleh Market and U+ Store. In each Android smartphone, an App market of respective mobile carrier is pre-installed mandatorily. (Users cannot arbitrarily delete the app market offered by the carrier.) In domestic mobile market, the app markets of the major mobile carriers are installed in approximately 50,000,000 Android smartphones. (Reference: by the end of March of 2015, SK Telecom has a market share of 41%, KT with 34% and LG U+ with 23% in domestic mobile market.) However, since the contents and users for the mobile carriers’ app markets are spread, the rate of usage of the three mobile network operators’ App Stores are relatively lower than that of other App markets.

As a result, to secure 50,000,000 users and cope with foreign App market such as Google and Apple, the three mobile carriers informed that since May 14th 2015, they have decided to operate a combined App market, ‘One Store’. Until now, developers needed to register their apps to each app store, but from now on, they can register their apps in all three App markets instantaneously through Combined Developers’ Center. Also, the three mobile carriers has standardized the commission fee to 30% and are planning to make it possible to make a purchase with points within the App markets and also with the mobile carrier membership points. By doing this, the domestic mobile network operators are planning to cope with foreign App market like Google and Apple by securing 50 mil users who are originally dispersed among other App markets and by offering comfortable managing services to the developers, gaining contents of a quality.

Google Play and Apple App Store are currently the major players in Korean Mobile market. However, the domestic app markets like Naver and the mobile carrier are spreading their dominance over the market with diversified strategies. While it is predicted to be a four-cornered battle between Google, Apple, Naver and the three major mobile carriers to dominate the Korean Mobile App market, let’s take some time to take a close look at the patterns of surrounding nations’ mobile markets.