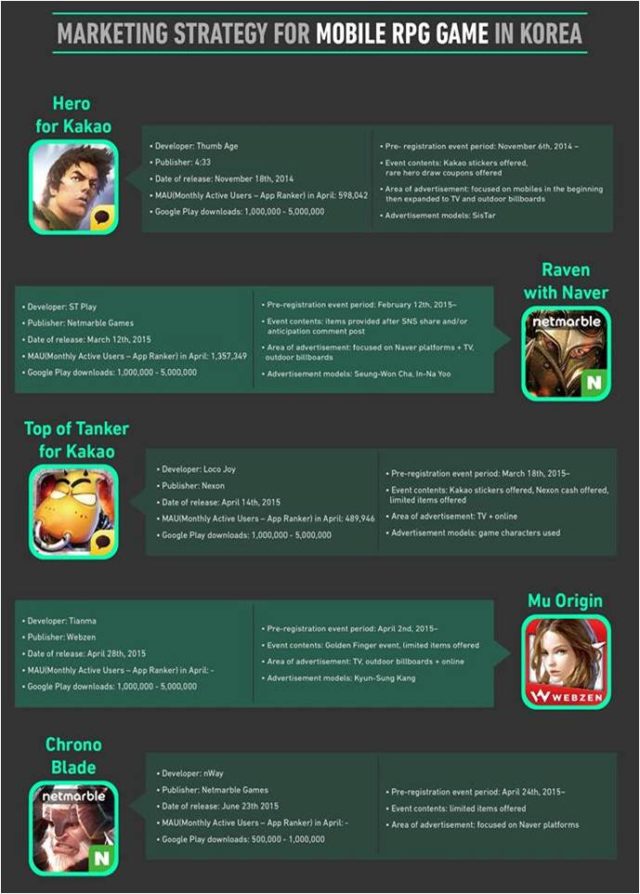 ‘Mobile games’ have become a form of easily accessible entertainment in our daily lives. It is easy to come across people playing games using smartphones on public transportations such as subways and buses.

Early mobile games had limits in terms of expression as well as genre due to technical problems. However, with the appearance of smartphones embedded with OS technologies, enhancement of development engines, and the improvement of graphic technologies, smartphones allow users to now enjoy games just as impressively graphic and in various genres as on PCs.

The Korean mobile games market especially is growing rapidly each year with a basis of a high distribution rate of smartphones, of over 40 million, and broadly established wireless internet infrastructures. (About 80% average growth yearly since 2011)

While various mobile games are being released monthly, according to the data announced by Inmobi in 2014, Korean mobile game users preferred RPG games the most.

Today we will look over the marketing strategies of recently released mobile RPG games and analyze the mobile games marketing trends.

1) Heightening the expectancy before the official release

Recently released mobile RPG games have been effectively raising the users’ expectancy by revealing play videos before the official release or through the press.

Netmarble Games revealed a play video of their mobile action RPG ‘Raven’ in January of 2013, then revealed an upgraded version of ‘Raven’ with a higher level of graphic and action in June, 2014 through the press, thus heightening the expectancy about the game before its official release in the first half of the year in 2015. ‘Chrono Blade’, which was released after ‘Raven’, is a mobile game that was co-developed by Stieg Hedlund, the game designer of Diablo, and by Dave Jones, the developer of GTA, and gained popular attention from users by revealing play videos of both developers.

Users who prefer RPG games think importantly of the game’s overall look as well as the features of the characters. Thus, it is important to strategically reveal videos containing strong storylines of the game, and impressive actions in play, in order to maintain the users’ expectancy before the release of the game.

2) Starting large-scale marketing even from pre-registration

Pre-registration is a necessary event carried out in the Korean mobile games market. Recently in the games market, efforts are being made to obtain as many users as possible right at release, by offering large-scale marketing events starting even from pre-registration.

According to Research ad, ‘Chrono Blade’, which received a lot of attention even before release, had also carried out a large-scale advertisement through pre-registration events. ‘Chrono Blade’ used about 1.6 billion KRW during the month of April alone, and this was the largest amount used for advertisement by mobile games in April of 2015.

3) Making use of familiar celebrities and contents

Ever since Super Cell’s ‘Clash of Clan’ carried out a large-scale marketing both on and offline in 2014, large-scale marketing that makes use of TVs, outdoor billboards, online etc. has become like a trend in the mobile games market. It became familiar to come across mobile game advertisements on TVs and on the streets, and mobile game companies are implementing aggressive marketing like other brands by using popular celebrities on TV advertisements to increase exposures.

Many celebrities were adopted as mobile game advertisement models such as SisTar for ‘Hero for Kakao’, Seung-Won Cha for ‘Raven with Naver’, and Kyun-Sung Kang for ‘Mu Origin’.

Marketing was conducted using not only popular celebrities but also with contents. Netmarble Games released its game ‘Marvel Future Fight’, which is a game that contains MARVEL’s popular characters, on the same date as the opening of the movie ‘Avengers 2’. Netmarble Games made use of the contents of the same IP in their game marketing and placed large bromide paper ads around movie theaters and played advertisements of ‘Marvel Future Fight’ before the movie during the run of ‘Avengers 2’, which gained about 9 million audiences, in the theaters.

As time passes after the release of a mobile game, users’ frequency of access start to decline due to the release of other new games and the shortage of game contents and some users may even leave the game altogether. Game companies carry out large-scale updates to develop game stories or to add in new heroes or items and along with these updates, carry out ‘update events’ in order to regain dormant and breakaway users.

‘Raven with Naver’ had the highest sales on Google Play since its release. However, ‘Mu Origin’ took over that first place after its release. Afterwards, ‘Raven’ carried out a large-scale update to add new items such as capes and magical weapons and was able to regain its 1st place position as the highest sales games within just 2 days of the update.

5) Marketing strategies that are not reliant on platforms

Until 2014, Kakao Games seemed like a necessary platform for success in the mobile games market. Most developing companies and publishers distributed their games through Kakao Games. Most high ranking games on Google Paly at the time had the label, ‘for Kakao’ on them. Games companies had to pay 30% of its sales, not including the commission fees, to Kakao but still were able to gain large advertisement benefits through Kakao Talk (messenger).
Recently, games companies that have already acquired marketing know-hows in the games market are choosing to carry out marketing without the aid of Kakao platforms in order to reduce commission fees, or are even preparing to release their own game platforms.

For example, through their aggressive marketing methods using Naver, such as the Naver main page and mobile, Netmarble Games’ ‘Raven’ was the first domestic mobile game to rank the highest sales on Google Play without using Kakao platforms. ‘Chrono Blade’, which was released after ‘Raven’, is also carrying out large-scale marketing using Naver and not Kakao. After gaining confidence and know-hows in mobile game marketing, Netmarble Games announced that for their next game ‘Idea(Role-playing RPG)’, they would carry out the marketing themselves without using any platforms such as Kakao or Naver.

Moreover, Smile Gate plans to release its own mobile game platform, ‘Stove’, in June, 2015 and other companies such as NHN Entertainment, YD online, Webzen etc. are all launching their games directly to the app markets without going through Kakao or Naver, and are independently carrying out the marketing for their games.

The marketing trend in mobile games markets is continuously changing in tune with the times. New marketing methods are continuously arising such as viral marketing and pre-registration events even before release, as well as marketing strategies that are combined with contents. Through our mobile advertisement research institute, here at Mobidays, we hope that you can keep in touch with the latest trends and formulate effective marketing strategies. 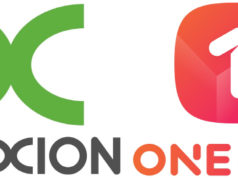