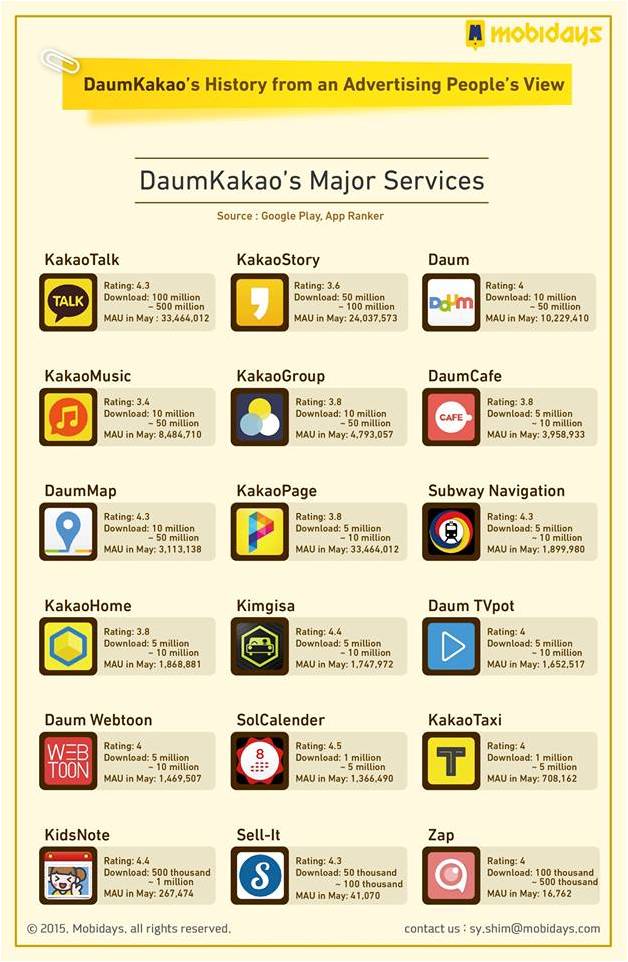 With the introduction of smartphones, the year 2009 marked a new generation for mobiles. Naver and Daum Communication, after having established a solid foothold in the PC-based online market, now expanded their power to mobiles. Meanwhile, KakaoTalk rose as the ‘nation’s top messenger’, and the company running KakaoTalk, Kakao, began to grow at an immensely fast pace. Competition in the mobile market had been fierce between Naver, Daum Communication, and Kakao, but after the merger and acquisitions between Daum Communication and Kakao was accomplished in the second half of the year 2014, competition in the domestic mobile market focused to DaumKakao and Naver.

2015 has been announced by DaumKakao and Naver to be a mobile business concentration year and news about both companies’ investment, merger, and expansion of services related to mobile business colored the first half of the year. DaumKakao especially is actively expanding their mobile business under the direction of Chairman Bum-Soo Kim.

– Prior to merger, termination of similar services run by Daum Communication and Kakao was taken place (Termination of services for MyPeople and DaumMusic On Air after June)
– Takeover of companies such as KidsNote(Notice notebook app), Kim Gi-sa(Navigation app), Sell-It(Used item dealings app), with outstanding results in the mobile market.

DaumKakao is presenting various mobile services through KakaoTalk, which established a significant number of users. KakaoTalk recently underwent updates in June and gained a lot of attention from the press and its users. These press and users even introduced the new features, and provided comments and reviews about KakaoTalk. Unlike how the existing media worded it, ‘Sim Gun’, a mobile advertisement research institute, plans to approach KakaoTalk’s update in terms of advertisements.

The following is a prediction of DaumKakao’s features based on the current mobile advertisement business’ situation and the new features of KakaoTalk, and may be irrelevant from the truth.

Daum Kakao and advertisements share a closely knit connection and thus the new services presented by DaumKakao can also be closely related to advertisements.

The part that many people focused on during the recent KakaoTalk update is the ‘KakaoTV’. To explain it simply, KakaoTV is ‘a combination of KakaoTalk and YouTube’. KakaoTalk users can view clip videos, live, and VOD videos while using the messenger.

As strong short clip videos are rising at a fast pace in the mobile market recently, KakaoTV, which allows communication through videos on messenger, can be viewed as DaumKakao’s shrewd movement to gain power in the mobile video market.

With the KakaoTalk update, DaumKakao presented a ‘Rubics’ system which automatically recommends customized contents to users through analysis on users’ favored contents usage response. This system provides the most optimized contents to its users by continuously learning about the interests of DaumKakao service users. DaumKakao plans to expand this service throughout its entire mobile contents within the year, after performing test runs in a few services providing contents, such as Daum mobile and KakaoTV.

The ‘Rubics’ system of DaumKakao is expected not only to provide customized contents to its users but also the information needed for effective targeting marketing. As DaumKakao continuously analyzes the interests of its users through contents, elaborate targeting marketing will become possible and the advertisement efficiency of advertisers would increase. Moreover, since users of DaumKakao services use multiple services with one username, mobile re-targeting advertisements would become possible.

When I come across information that I would like to study about, I often share the URLs through KakaoTalk with my teammates. Along the way, I noticed that there had been changes made in the chat windows after the KakaoTalk update.

Previously in KakaoTalk, no response could be observed when inputting URLs. However, in the newly updated KakaoTalk(mobile version), an additional short information as well as the URL page’s preview is sent when a URL is shared. It may seem like a simple feature but will provide a greater advertisement utilization if a download button or a purchase button is added, like Facebook advertisements.

Until now, if there was something a user wanted to know while chatting, he/she would have to close the chat window and open up a portal app(Naver, Daum) and this proved to be inconvenient. When the <#> feature is added, users would be able to search for whatever information they need within the chat window, while using the messenger. In other words, it can be thought of as a combination of messenger and portal. If the KakaoTalk research feature is strengthened, research advertisement products, which are exposed through top research results based on keywords, may be introduced.

DaumKakao is adding new features based on KakaoTalk with significant number of users established. Features such as Kakao Story and Kakao Music seem to run separately but in fact, are all connected through KakaoTalk. Through this update, KakaoTalk can now provide video contents and plans to provide various contents through a service called ‘Channel’ later on. As well, with the addition of the research feature, it is now possible to access lots of information while using the messenger. If all these features mentioned above are settled, KakaoTalk may shift to have a stronger portal tendency rather than that of a messenger.

Most Korean smartphone users, whether old, young, females, or males, use KakaoTalk. If KakaoTalk settles down as not only a mobile messenger but as a ‘most-used domestic mobile portal’, mobiles would gain even more weight out of DaumKakao’s advertisement profits. As Daum Kakao continues to attempt various efforts to gain power in the mobile market, a careful observation on the competition from Naver and foreign services would be needed.