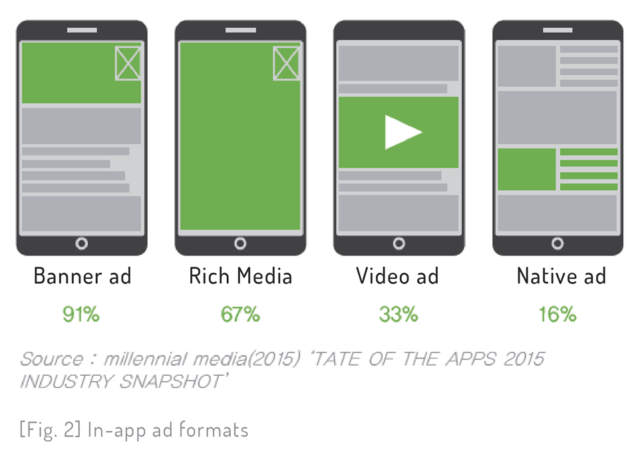 The internet environment is gradually shifting from desktop to mobile. People spend more and more time on their mobile devices. A research shows that the average time people spend on mobile apps is over three hours a day and the usage of smartphone apps is also steadily increasing. This change implies the potential growth of the mobile ad market. From this perspective, we’ll look over the current status of mobile ad market and in-app advertising.(Data supported by DMC Media)

The mobile-first phenomenon is gaining momentum. Nowadays, mobile is already an essential part in our daily lives. As the internet ecosystem becomes more mobile-oriented, along comes the growth of mobile ad market.

According to a research conducted by Korean Click in 2014, a Korean uses smartphone for 3 and 39 minutes a day on average, excluding the time spent on making calls. Among this usage, 3 hours and 6 minutes are spent on mobile apps. This is a proof of how deeply mobile is involved in our lives. This phenomenon is not limited to Korea. The mobile usage is growing worldwide along with the mobile advertising environment.

The mobile oriented environment is a crucial background for marketers who need to observe user behavior. It is also an opportunity to look into different aspects such as research and analysis of users’ mobile app usage and the developers’ business model, current status of global mobile app advertising market and in-app advertising.

According to a study done by the market research company, eMarketer, despite the continuous increase of app users, users of paid apps are not expected to grow any further. The report states that “The usage of paid app is not likely to increase even if at least 800,000 mobile app users, which accounts to one thirds of the total US mobile users, purchase a paid app once a year”.

However, it is too soon to have a pessimistic view solely referring to the eMarkerter’s report. The fact that approximately 93% of smartphone users and over 90% of tablet users downloading apps is still a great opportunity for in-app advertising. The report from the app analysis company App Annie supports this perspective. According to a research on the major mobile contents consuming countries such as Brazil, Canada, France, Germany, India, Japan, Russia, Korea, UK, USA and more, the revenue through in-app advertisements and premium apps have significantly increased while the revenue from free apps have decreased.

In addition, a personnel of eMarketer also commented as followed: “The mobile app market is gradually changing. Many app developers are constructing various business models and is working hard not only to create profit but to also embrace many different users.” Mobile app developers and publishers are completely occupied in developing business models via in-app advertisements and in-app purchases. They are also developing various and complex models including video advertisements.

Meanwhile, according to a research conducted on app developers and publishers by Millennial Media, a mobile ad data analysis & solution company, most apps support banner ads and apps that support rich media and video ads have grown 6% compared to the previous year, respectively resulting in 67% and 33% total.

For the app store, 59% of app developers and publishers consider free apps and 35% consider both free/paid apps. Only 6% of the total had paid apps in mind.

Referring to the data of Medialets, a mobile ad and platform analysis company, clicks per hour made in in-app advertisements is averagely 1%, which is higher than 0.1~0.2% in desktop based web ads. This is an evidence that in-app ads are definitely effective. To have a deeper insight, the click through rate(CTR) of tablets is 0.59%, which is higher than that of smartphones which is 0.41%. CTR of mobile app ads is 0.58%, higher than mobile web ads which is 0.23%.

The reports by IDC and App Annie in 2014 also demonstrated similar results. It has noted that the revenue of mobile in-app ads will exceed the revenue of desktop based web display ads by 2017 in the major mobile contents consuming countries such as Brazil, Canada, France, Germany, India, Japan, Russia, Korea, UK, and USA. Mobile in-app ads are also expected to show the sharpest growth within the field of online and mobile advertising.

However, in-app advertisement deserves the attention solely by the features it can provide. It is especially considered effective due to its capability of delivering ads to the right targets on the right time, thereby holding attention and also drawing interactions. Despite such advantage, in-app advertisement still has some flaws to overcome. Now we’ll look at how powerful in-app advertisement can be once it has overcome its flaws, based on the article posted on the web and app specialized blog TNW, ‘Five Tipping Points of In-app Advertising.’

Marketers cannot conduct proper targeting on various platforms unless they have a way to track individual consumers using desktop, mobile and many different mobile devices. However only a limited number of mobile apps are capable of tracking specific users based on their login account on different platforms. It is difficult to track by device since many consumers share a tablet or desktop computer with their family members.

In order to run in-app advertisements, methods such as GeoFencing(establishing a virtual GPS fence that reports the access of any target within the fence. It marks the range of target’s location) or proximity-based marketing(a marketing technique where the communication strategy is altered depending on the target’s location) must perceive consumer using various platforms a single being.

In order to actually run an ad through various advertising platforms and RTB, marketers and publishers are subject to review tons of reports. Publishers and marketers should be able to gather data from every advertising platform and analyze it with precise insight for publishers to maximize their advertising revenue or for marketers to manage their budget more efficiently. Moreover, as reported by Juniper Research, data acquisition and analysis are also essential when utilizing the location based advertisements to increase consumer engagement. 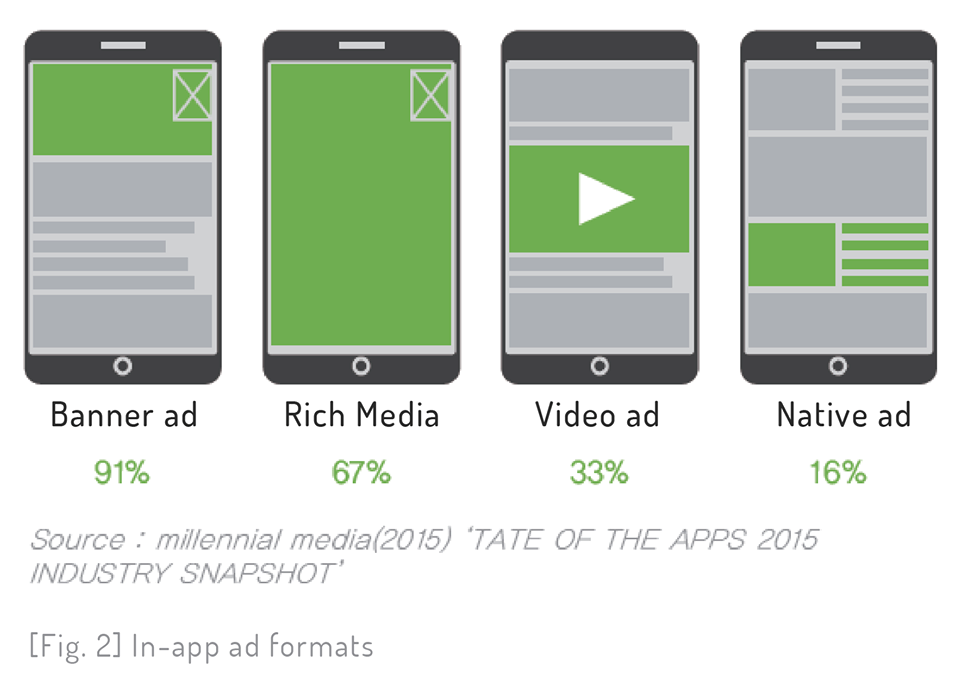 However this process is in fact time consuming, and is prone to accompanied errors. Although data analysis has had a great progress in digital marketing, it still demands many improvements within the field of in-app advertising.

03 Development in Methods of Measuring

04 The Discovery of New Apps

Most apps are hidden somewhere in the GooglePlay or iOS App Store while advertising budgets are concentrated on only a few apps in the market. In order to promote the visible effect of adverting, we must support the discovery of various apps. Since in-app advertisements are targeted towards users downloading the app, supporting the discovery of many different apps based on various targets is very important.

A standardized ad format guarantees the same quality of ads within other online platforms, sites and networks. However in-app advertisement formats are currently subdivided based on the screen ratio and size of smartphones, tablets and phablets.

In addition, due to the increase in native ads, creating a standardized format among different apps is even more difficult. Marketers have to create many different versions of ads in order to send them to users using various platforms which are barely alike.

Standardization of in-app advertisement format is a prerequisite for in-app channel to become a major channel.