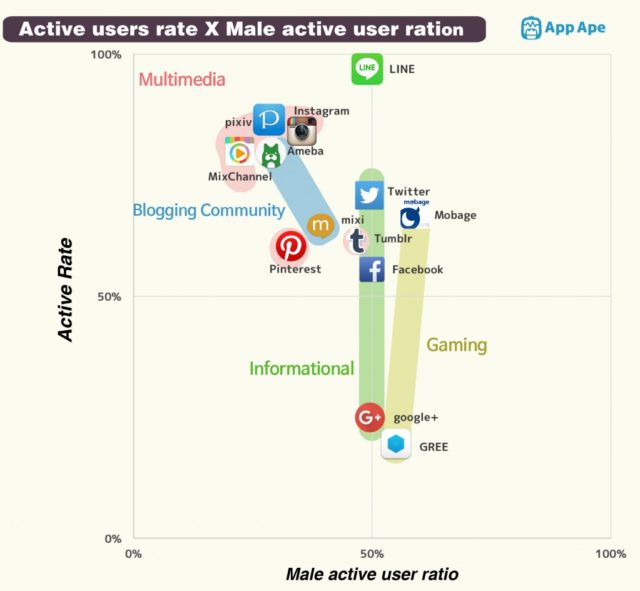 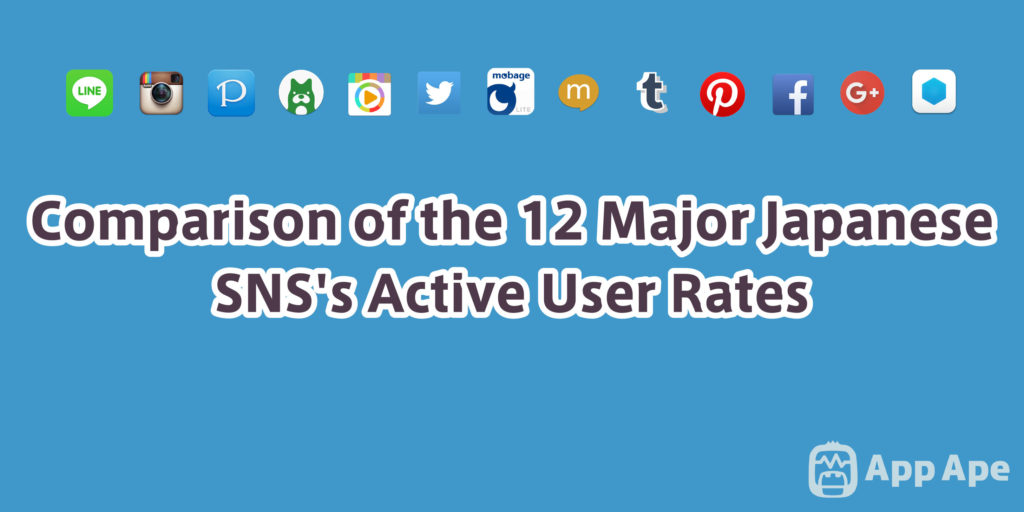 Last time, in our Japanese App Ape Lab has introduced comparison data of the 12 Major
Japanese SNS’s active user rates. We updated the data by adding “MixChannel” as the 13th Social Networking Service. Below is the list of SNS we will be comparing today.

We will be analyzing those SNSs by categorizing into big 5 groups excluding LINE app.
● Informational : information gathering , business use (Facebook, Twitter, Google+)

Ameba acquired more than 80% of Active Users Rate in Japan!
Through this research, overall SNS active users rate has increased from the last research in December, 2014 . We can see that Ameba has shown a big improvement of its active rate to 80.19% from 58.3%.

Tumblr and Pinterest show the number changes where active users rates reached over
50%. As we explained in the article “Is Ameba the only one survived in Japanese SNS
Market?”, Ameba currently has been trending their active users rate. Now, gaps between mixi and ameba have expanded to more than 15% of active users rate where these two are categorized into same blogging community.

Pinterest and Tumblr have shown the 15% increase from the last research, and acquired
60% of active users rate. Users who have installed those apps have activated its app more
than once within a month.

Especially, Pinterest is the service where users can visualize their hobbies and interests by
putting together the pictures which are uploaded by a variety of users.

Differ from Instagram where you share the picture you have taken, Pinterest can allow you to share the collection of the pictures you would like to do or try in the future. For example, Instagram is good for sharing the information which has occurred in the past, such as “I just came to eat Ramen Noodle!” On the other hand, Pinterest is more likely to allow you to collect the visual and detailed information of the Cafe where have the sweets you would like to try iin the future by putting them together into the folder you created. Pinterest is the service which users can have more options of what to do with this app based on their purpose.

This vertical center line as a boreder, each SNS is distributed on both side. If you categorize those into three groups,

In the category of Informational SNS, Facebook, Twitter and Google+ have ration of 50% of male active users rate each, which shows the both genders have been actively engaging in term of the use of informational social networking sites. Left hand side of the matrix graph, where you should see a higher female active users rate, you can locate the scatter of Multimedia and Blogging Community SNS such as Instagram and Ameba. Pixiv, Instagram, and MixChannel are all multimedia SNS and focused on Photo Sharing SNS. They are spotted at the close point within a Matrix, and it is obvious that those SNSs are competing over the same targeted users. On the right hand side of the matrix graph, you can spot the scatter of Game SNS apps such as GREE and Mobage.

Like multimedia sharing or informational SNS apps we introduced today, each SNS media
has different characteristics and way of use. Depends on the people’s utilization of each
SNS, monetizing way can be greatly affected to every company. By the result of the
research, the high active users rate has proved that SNS app has been essential part of
people’s lifestyle. App Ape will continuously be paying close attention to how the Japanese
market reacts to the Social networking sites.