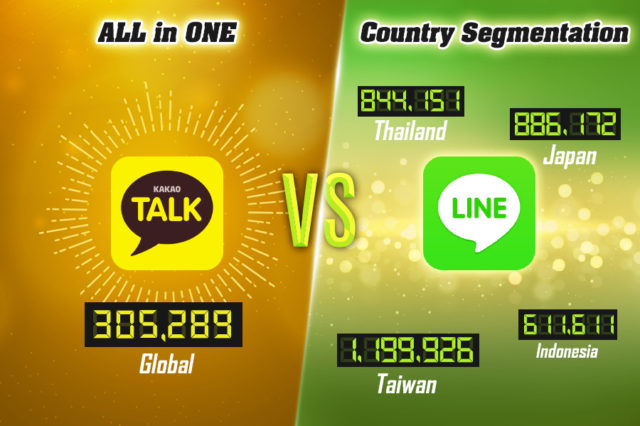 There seems to be no place for Line if only evaluated in the domestic market. The number of Korean users is at 16 million, but the MAU is still not being revealed.

The situation is different for the global market. Line’s global users exceed 600 million, and the MAU is at 212 million. The number of MAU for the 4 main user-countries, Japan, Taiwan, Thailand, and Indonesia, are at 137.6 million. But KakaoTalk’s MAU only reached 10 million.

Due to the different situations in the domestic and the global market, Kakao and Line are managing their Facebook marketing differently as well. The editorial department at Mobi Inside summarized the global pages of the two messenger services in the following way.

Kakao is pushing a strategy of using a single global page. KakaoTalk’s global page had 305,289 “Likes” and it is publishing one or two contents unified in English every week.

Did you know how much the Kakao Friends love the movies? (We didn’t!)

Posted by KakaoTalk on Monday, November 2, 2015

The global page of KakaoTalk is receiving an average of 200~500 “Likes”. Pages for Brazil, Indonesia, Japan, and Italy are also being managed but looking at the number of “Likes” as well as the contents, it seems that they aren’t being actively run.

Line is managing a global page(number of “Likes” at 220 thousand), but it felt it was simply for formal reasons considering the period of content publications, number, and responses.

However, the pages of Taiwan, Thailand, Japan, and Indonesia, where Line is well settled, were very active.

The biggest feature of Line Facebook is that targeted country’s page is managed in that specific country’s language and the contents reflect the country’s culture. Such a decision was most likely due to the fact that global pages have a limit to fully settling down locally.

Kakao also uploaded writings in the specific languages for the pages of Italy, Brazil, and Japan but only used English contents for images other than the Japan page. However, it should be noted that perhaps active devotions and investments cannot be made due to the low popularity in such countries.

Looking at the differences in global strategies of the two services shed light on something.

Providing English contents simply because it is ‘global’ is not the best way and a detailedmethod for providing country-specific contents with according understandings of the culture is needed. However, it should also be noted that success cannot be guaranteed in overseas expansion even if specifically designed strategies are used.