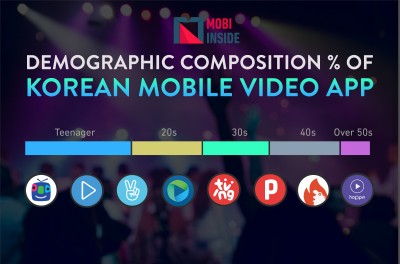 Mobile videos are gaining strength recently. This is thanks to an atmosphere to view videos on smartphones through the 4th generation communications network, LTE, and data-centered phone fares being established. We then wondered, what does the current Korean video app status look like? We, at Mobi Inside, analyzed the current usage status of mobile video apps serviced by domestic companies based on the November data released by App Ranker.

Afreeca TV is a video platform company that was founded in 1996. It is no exaggeration to say that Afreeca TV is the originator of real-time online broadcasting shows. Afreeca TV introduced a reward service represented by star balloons.

Daum TV Pot is serviced by Kakao and it is a platform that allows viewers to watch real-time broadcasting shows through PCs or mobiles. Daum TV Pot began to rise since its use as MBC’s ‘My Little Television (referred to as ‘MyLiTel’ in the rest of the article)’ broadcast’s partner platform starting from April of this year.

In May, 2015, about 1.3 million people viewed MyLiTel live on Daum TV Pot and 60% of them participated through mobiles. MyLiTel still has a popular viewing rate of 6~7% and is receiving lots of attention.

V App is a real-time mobile video app released by Naver in August. It allows viewers to watch live broadcasts or past broadcasts of celebrities (singers, actors, comedians etc.). In its early services, idol singers (Big Bang, Girls Generation etc.) who are popular amongst teens hosted real-time broadcasts which allowed V App to gain lots of teen users in a short amount of time.

The Current Status of N Screen

N Screen service was released by contents production companies and telecommunications companies. Pooq TV – co-invested and co-released by MBC and SBS – ,Tving– designed by CJ Hello Vision – and Hoppin– designed by SK Planet are some of the main examples.

N Screen gained attention as a new form of platform for video content consuming but some of the services are barely maintaining their existence. As SK Telecom took over CJ Hello Vision, Tving will be transferred to CJ E&M and be combined with a service called ‘Bingo’. SK Group plans to divide and merge SK Planet’s Hoppin business in order to combine it into a new platform.