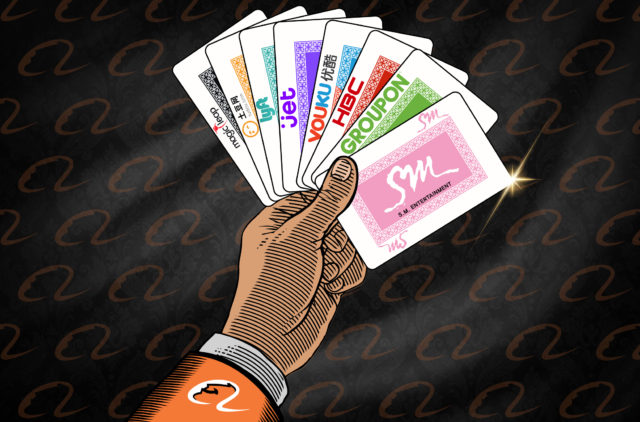 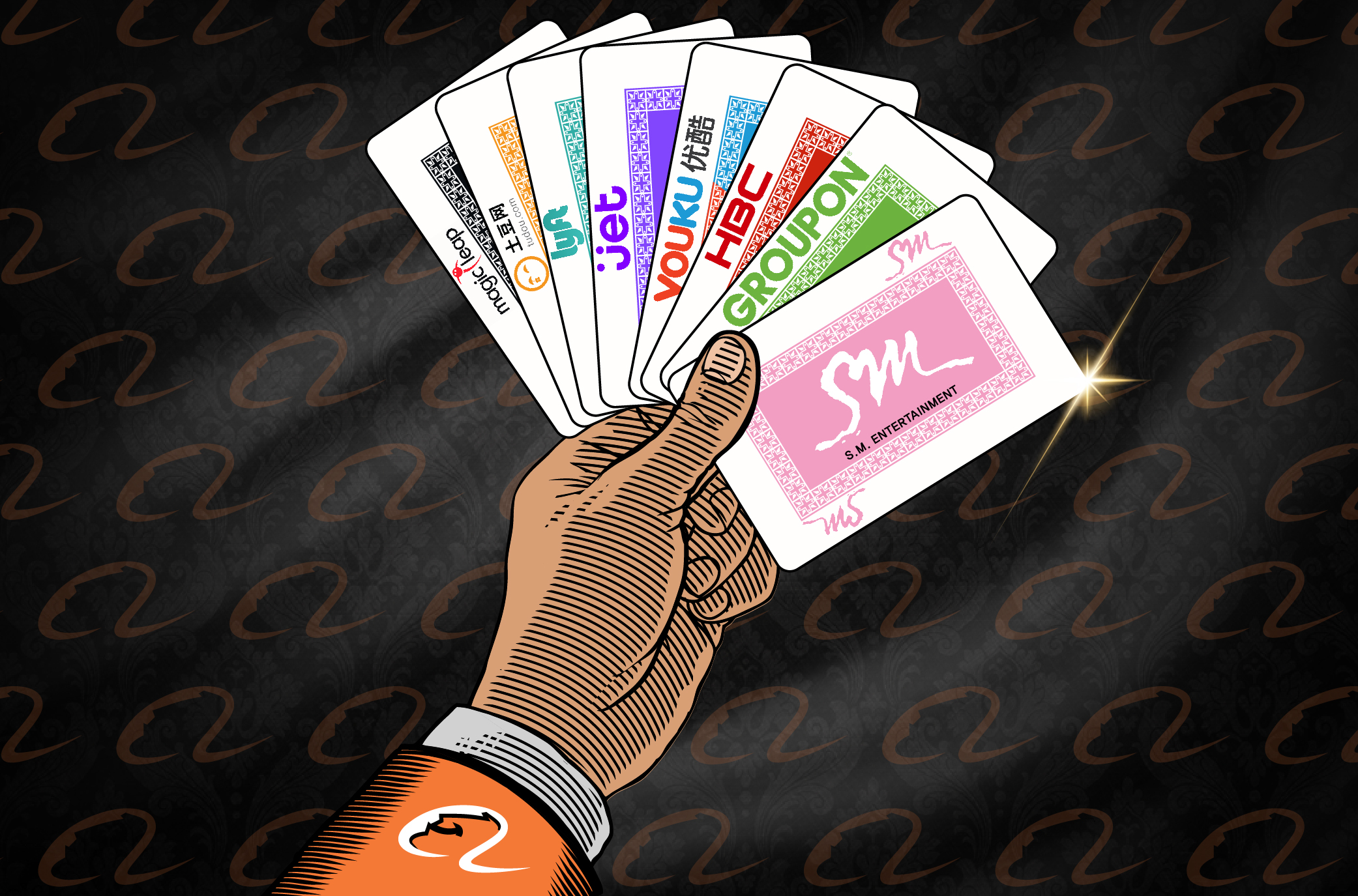 It is not common for a Chinese company to enter the global market. BATX. The keyword created using the initials of 4 Chinese major companies, Baidu, Alibaba, Tencent, and Xiaomi, is rising but in most cases, only the sourcing of foreign products and ideas within the Chinese domestic market took place.

Baidu cannot get past the title of being a search engine only within China and while Tencent has a hold on payment and games business, it is limited to the Chinese market. Xiaomi cannot rashly enter the global field due to a patent right. Among these 4 companies, it seems Alibaba is the only one that is aggressively taking over global companies. Why is Alibaba taking over the shares of foreign companies? Two aspects must be considered when answering this question.

# Alibaba is taking part in the cultural business?

The keyword that Korea would be interested in is probably SM Entertainment (written as SM from this point on). When Alibaba recently took over 4% of SM’s shares at about 35.5 billion KRW, related reports poured out. The reports were mainly focused on SM Entertainment’s targeting of China. Riding on Alibaba’s platform, it would see a hopeful future and grow into a multi-entertainment company with 1.3 billion Chinese customers.

While I have no intention of taking away the hope for such a future, I am rather doubtful about whether selling shares to Alibaba would actually affect SM’s business in China. Alibaba’s entertainment business direction should be looked at in detail for this.

After taking over the Hong Kong media group ChinaVision in 2014, Alibaba changed its company name to ‘Alibaba Pictures’. It is somewhat like a complex entertainment subsidiary company of Alibaba. It should be noted who joined this company as the nonexecutive director. It is China’s popular star Li Lianjie(Jet Li).

Jack Ma (Ma Yun) is well known for his deep interest in Tai Chi. He even asked the martial arts novel author Yong Kim for the signboard writing in the Taobao office which seems to show his strong interest in the martial arts. A martial arts competition is held every year by Alibaba’s subsidiary company, and Jet Li often participates as one of the judges.

In 2013, there were reports that Jack Ma will open up a Tai Chi studio after he steps down from the CEO position of Alibaba.

Alibaba began their journey as an entertainment group with Jet Li. Jack Ma’s personal interest in Tai Chi was behind this connection. Afterwards, China’s popular actress Zhao Wei (Vicki Zhao) joined as the 2nd largest shareholder, and as priority investment rights were given to Peter Chan and Stephen Chow directors, famous figures of the movie industry naturally gathered. As such, it can be understood that Jack Ma is entrusting the leadership of Alibaba Pictures to actors with personal relations and acquaintance to himself.

Until now, Alibaba Pictures has been sending love calls to not only Korean but also Hollywood’s movie producing companies. This includes Walt Disney, Paramount Pictures, Warner Brothers, and Universal Studio. After its recent partnership with Disney, Alibaba Pictures launched ‘Disney Life Service’ in China which would allow users to subscribe Disney’s contents through mobiles.

To sum up, the purpose of signing partnerships with foreign entertainment companies is that it would act as a method for Alibaba’s entertainment business growth rather than opening up a path for foreign companies to enter the Chinese market. From Alibaba’s point of view, they were able to gain an opportunity to encounter the prime information of Korea’s major entertainment company at a small(?) price of 35.5 billion KRW. Such an intention is also hidden behind the takeover strategy of other business areas.

# Learning About the Global Market

According to Bloomberg’s report, Alibaba has taken over the shares of online commerce company Jet.com, augmented reality company Magic Leap, and automobile reservation company Lyft for its entry into the US market and as well bought the shares of Groupon for the same reason. The security analyst Gil Luria Wedbush’s comment in the article was quoted as below.

“They (Alibaba) don’t want to achieve something using just Alibaba. This is why they invested in other companies to learn and to strengthen their global business.”

I personally believe that such an analysis is quite accurate and noteworthy. Alibaba’s founder, Jack Ma has said the following things before regarding ‘global market entry’.

“It is not a global company simply because it does global business. The company should have well-established global business philosophy, culture, vision, and talented human resources. A company that understands a specific country’s culture and social issues and thus contributes positively in the development of the market ecosystem is a true global company.”

The following event took place 6 years ago when the Taobao Korean pavilion business was being run together with Alibaba. Large companies that received our offer agreed on the surface but meanwhile were trying to make direct contracts with Taobao secretly. In such occurrences, the Taobao manager gave us a phone call. The manager then said, ‘when meeting Korean companies, such as yourselves, you’d better be more careful. Don’t worry, though. We will do business only with you’. CEO Jack Ma clarified that Alibaba’s 1st priority is customers, 2nd is sellers and partner companies like us, 3rd is workers and 4th is shareholders and have been carrying out this idea company-wide. Small companies such as ICB were able to continue Alibaba’s business for this reason. – Han-Yong Lee, ICB representative

The reason behind Alibaba’s takeover of the shares of foreign companies at 1 digit percentages rather than entirely at once, should be looked at with such philosophy in mind. There is a figure that Jack Ma always mentions when he talks about global strategies. That is Genghis Khan of Mongolia.

Niu Gensheng(CEO of Mengniu Dairy Group) had once said the following to me. “Mongolia is great. Even though they took so much land, they never took away the assets of the land. It is not land that he wanted. Genghis Khan had a sharp eye in terms of strategies. He imprinted Mongolian spot to children in all the areas. This was DNA. And this was his great strategy. A quarter of the entire Asian population is born with Mongolian spots. They are all Genghis Khan’s descendants.” It may sound simply as a fun and interesting story and nothing more. However, we can learn about what Genghis Khan thought was the meaning of DNA through this story.

Small scale takeovers of shares that is currently occurring can be understood differently with this story in mind. Alibaba’s takeover of shares is not simply about leaving marks like Mongolian spots in foreign companies. Alibaba will use the takeovers as windows of opportunity to understand the foreign market and as well make use of company information and experiences. There is a precedent example of Tencent creating a game publishing environment in China after investing 72 billion KRW in Kakao then benchmarking it.

Alibaba’s small scale takeover of global company shares needs to be understood as the extended version of CEO Jack Ma’s possession of a global company DNA. In other words, agreeing on a partnership with Alibaba isn’t necessarily directly connected to entry into business in China. Alibaba making use of foreign companies at a small lesson fee is perhaps a better understanding of the partnership.

Perhaps it should be noted that only the companies that have been taken over and not Alibaba itself, were taken into consideration due to the brand name of Alibaba.