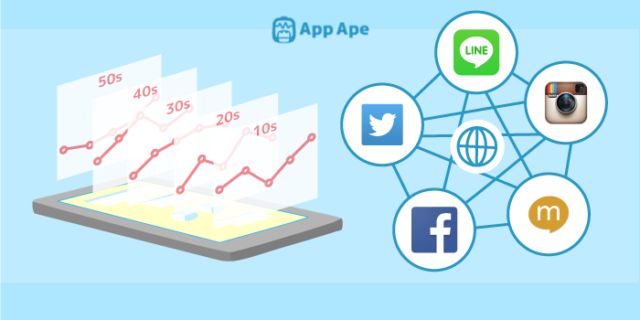 We will look at the proportion of the five major social media use in Japan by gender and generation in Japan. Five of the targets we will be looking at today are listed below.

This type of research indicates the newest ratio of the use of social media by gender and generation since February 2015, and the analysis has shown how it has shifted over a year.

These graphs are showing ratio of the social media users by generation by App Ape, and they are divided into two with male on the left and female on the right.

Comparatively, the fact that both LINE and Facebook have had almost equal amount of users by each generation has shown on the graph above. Not only so, but these two social media seem to be almost the same for the ratio of the use by each generation between male and female. In addition to these facts, this examination has shown that LINE and Facebook have been managing themselves well, because the use by gender and generation have been kept stable compared to the last examination which was conducted in February 2015.

Rising Number of Social Media Use in 30’s 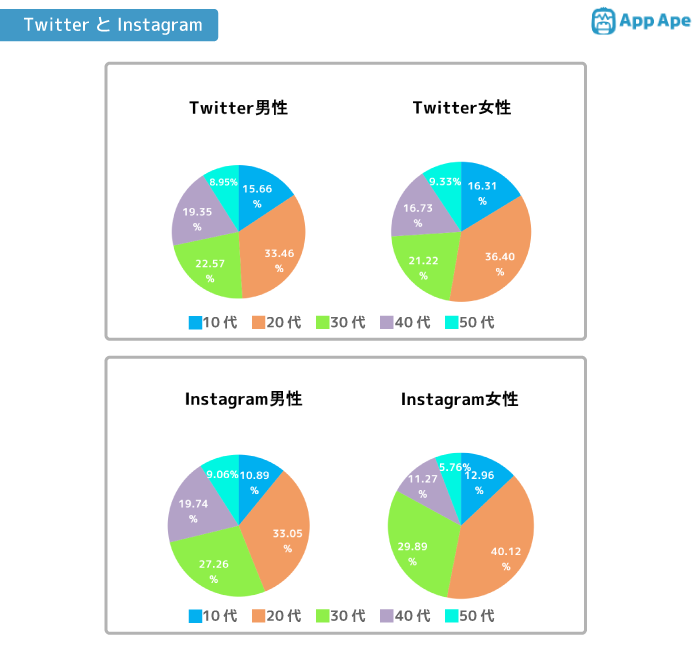 Although, we can clearly see that more than fifty percent of Twitter users in Japan are teens and twenties in the graph above, the ratio of those users are actually shifting downward since the last research. On the other hand, the use for Instagram from people who are in thirties have increased since February 2015. Especially, the ratio of thirties male users escalates upward by over ten percent. We can say that there was rise of recognition for Instagram from users who are in thirties because of the media advertising such as commercials in a year. However, Instagram used to be supported mostly from the younger generation. The graph of both Twitter and Instagram have becoming to look similar to LINE time by time. Especially, the rate of the amount of users who are in their thirties and forties will gradually increase as expected in next few years. 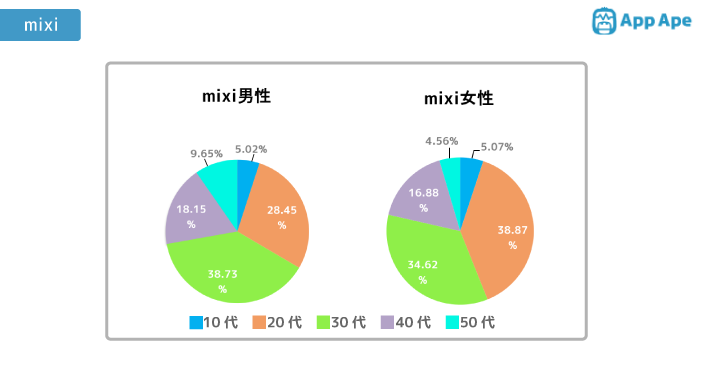 mixi is a Japanese one of the the oldest social media which you can write diary and becoe community member. Mostly other social media gradually became popular and now mixi is used as a game platform, and a place you store the old memories.

Largest change has been shown for the users of mixi among five social media. Although highest rate for the use by generation were by the twenties in the last research, the graph above shows that users who are in their thirties actually use mixi the most nowadays. In particular, rate of thirties male users increased by sixteen percent and now account for a percentage of thirty-nine, and rate of thirties female users also escalated upward by five percent and now account for a percentage of thirty-five. How did this much of change for mixi occur in a year? Because mixi has existed since the generation of flip phones, and there are still many users who are in their twenties and thirties since then. Also, the rate of Japanese users who are in their thirties increased because of the fact that users who are twenty-nine years old turning thirty.

What did you think of the results? Today we showed the research of five dominant social networking services in Japan, and could clearly reveal that there are large shifts for the use of mixi and Instagram in one year. Since the major SNS are in use by great number of people in Japan, the approaches such as advertisements may differ according to the generation of those SNS users.

These data about the ratio of the SNS users by gender and generation from are available through App Ape Analytics. You can check what we showed today and much more information such as MAU, DAU, and hourly active users. Please try our App Ape analytics for FREE.