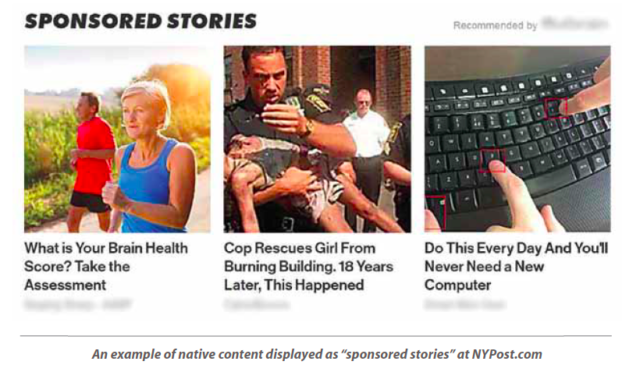 Much like product placements (embedded marketing), native advertising is meant to mimic the form and function of the publisher’s environment. The goal is to deliver paid ads that are so integrated into the page content, assimilated into the design, and consistent with the platform’s behavior that viewers simply feel that it belongs and engage with it more seamlessly. In point of fact, research shows that customers prefer native ads and interact longer with them than with display ads. The more relevant the content for the user, the happier the user is.

At least six types of ad units are used – and heavily supported – in native advertising:

• Recommendation widgets
Driven by Outbrain, Taboola and Gravity, these often appear at the bottom of a web page displayed as “From around the web” or
“You may also like….”

• Promoted listings
Examples can be found on Google, Amazon and FourSquare.

• In-ad units
These are used by Federated Media, Appssavvy and Martini Media, for example.

Whereas product placements (embedded marketing) place the product within the content, native advertisement seeks to merge the product and the content. On high-trac web properties like The Hungton Post, Yahoo.com, AOL.com, NYPost.com and NBCNews.com, it’s normal to see native ad units camouaged as related news stories or “what to read next” content from around the web.

Because of this merger of advertising and content, displayed within the same publishing environment, there have been questions about the legal status of native advertising. Even among its practitioners, there is no consensus on the true value of native content. Some ad executives do not consider it advertising, and editorial departments go to great lengths to make sure it is not seen as editorial content. This has led to a major debate about the legalities and ethical issues in a situation in which the lines are murky for the reader or consumer. 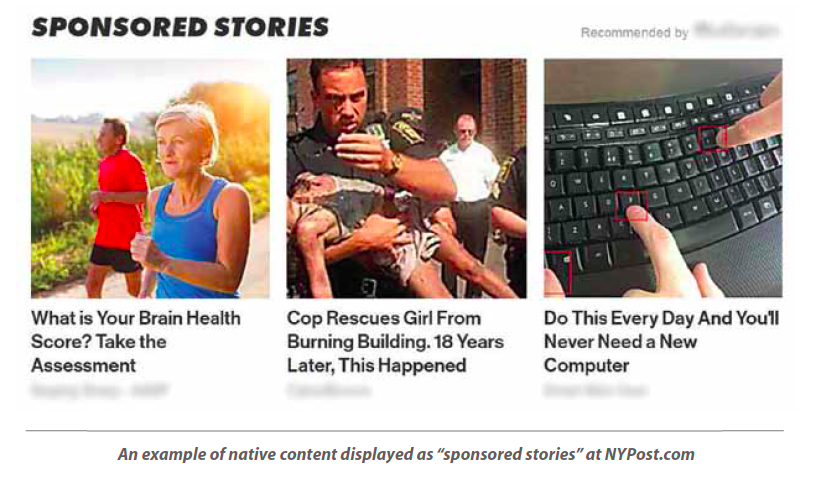 Clearly concerned that native advertising may be
crossing the church-state separation between editorial
and advertising content, the FTC got involved and held
a workshop on advertorials.

In April 2016, it released a guide for native advertising that stressed the importance of consistent disclosure tags like “Ad,” “Advertisement,” “Paid Advertisement” or “Sponsored Advertising Content.” The commission also called attention to the shady use of tags like “Promoted Content” or “Partner Content” and called for the use of signiers – dierent font colors, shading, audio disclosures – to clearly distinguish sponsored content from editorial content. 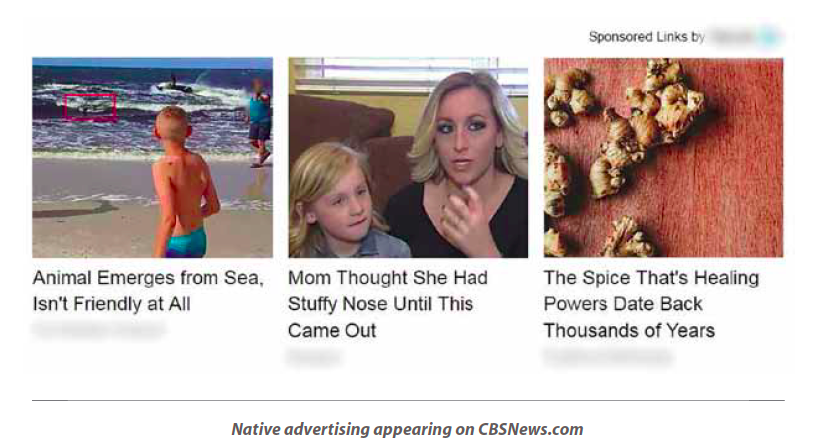 Even with the FTC’s involvement, the ethical and disclosure issues remain on the front burner. In August 2016, the non-prot Online Trust Alliance (OTA) found that web publishers were not properly marking native ad units, confusing web readers and essentially hurting the emerging advertising format.

The OTA examined 100 well-known news websites and found that 69 percent contained some form of native advertising, which was dened as “content that is funded and produced outside the publisher’s editorial review or inuence, yet is designed to appear similar or homogenous to editorial.”

More worrying for the online ad industry, the OTA found that 71 percent earned “failing scores” for disclosures, delineation and discoverability, meaning that they did not provide consumers the ability to easily discern editorials from ads.

This distrust has pushed web surfers to use ad-blocking software on both desktop and mobile platforms. The Interactive Advertising Bureau (IAB), a trade group that represents the interests of the online ad industry, has estimated that about a third of U.S. Internet users employ ad blockers and 17 percent are “at risk” to begin using them.

Technical Implementation (How It Works)

The creation and display of native advertising is a complex undertaking. It involves multiple technological layers to create the advertising content, set up parameters for targeting and run the content through platforms for pricing and bidding.

Even before the ad is served to the end user, an advertiser must use technology to handle geolocation targeting to reach users by country, state/province or city. Targeted native ads also allow the advertiser to choose the context of the page where ads will run and the types of devices (narrowed even to mobile operating system) and behavioral targeting that will push the ad to specic web surfers based on their browser or search history.

There are several categories of native advertising
platforms:

• Closed platform
The most common is the “closed platform,” which is created by brands to promote their own content on their own websites. Advertisements seen on these platforms are designed to exhibit ad units within the connes of the website’s specic agendas. Well-known examples of closed platforms include Promoted Tweets on Twitter, Sponsored Stories on Facebook and TrueView Video Ads on Google’s YouTube.

• Open platform
This type of platform involves the pervasive promotion of the same piece of branded content across multiple platforms, but through some variation of native ad formats. Unlike closed platform content, open platform content itself lives outside any particular website that it appears on and is usually distributed across multiple sites by a third-party company. This means that most advertisements appearing on open platforms are placed there by an advertiser.

• Hybrid platform
With this category, the content publishing platforms can install a private marketplace where advertisers have the option to bid on the inventory of ad space, either through direct sales or programmatic auction through real-time bidding (RTB).

This means that advertisements distributed on hybrid platforms are placed there by the platform itself, the space having been sold to an open platform advertiser. The majority of native ads are generated by reputable agencies and can be tailored to keep the ad unit within the publisher’s website or serve the ad to a third-party landing page.

The native ad unit is powered by a script that is generated to handle all the targeting parameters. What is most important to understand is that the data within the “related content” or “news from around the web” is hosted in ad servers belonging to the publishing platform’s ad servers.

This has major security implications, since the publisher has essentially outsourced control of content hosted on its site. In addition, there are signicant risks involved when publishers take security into their own hands and struggle to cope with the epidemic of malvertising.

Unfortunately, the technical implementations of native advertising are largely overlooked by an industry that has struggled to cope with the deluge of malvertising attacks over the years. The new format relies on scripts to handle delivery and targeting, and these introduce a wide range of security risks that need to be addressed. The current security problems are already severe. The IAB estimates that fraudulent impressions, infringed content and malvertising cost the U.S. digital marketing, advertising and media industry $8.2 billion annually. The IAB blames badly designed business processes and aws in the digital advertising supply chain for the skyrocketing losses.

Malvertising exposes web users to unknown or potentially dangerous third parties, and according to IAB estimates, losses from this threat surpassed $1 billion in 2015, with $781 million of this amount generated from ad blocking implemented due to security and malware concerns. The costs associated with investigating, remediating and documenting direct incidents of malicious advertising total $204 million, the IAB warns.

When publishers use native ads powered by third-party agencies, they basically are ceding control of their property to outsiders and could be serving malware if a hacker successfully executes a malvertising campaign.

While native ads have been shown to be low risk for malvertising pre-click, there is a high risk in the post-click, specically in the landing page, which may be infected with malware. How could a native ad direct a user to a malicious landing page? This can happen when the nal landing page is hacked, when a poisoned script is inserted into the delivery path to redirect the user to a dierent landing page, or when the whole campaign, including the ad, was designed by the cybercriminals themselves.

Cybercriminals can employ automated tools to discover third-party landing sites used in native ad campaigns and hijack those pages. Popular platforms like WordPress are known to have vulnerabilities. Many of these types of platforms are unpatched, so it is relatively easy for a cybercriminal to use o-the-shelf exploits to take control of the landing site. Once this happens, the site silently serves malware without the knowledge of the publisher or the reputable ad network.

Because native advertising units are basically scripts created to handle delivery and targeting, it is relatively easy for malware purveyors to insert third-party scripts and codes into native ads. Malicious actors hijack the delivery mechanism to serve scripts and use poisoned JavaScript to redirect users to sites hosting viruses, Trojans, spyware and ransomware. This is a threat closely associated with both closed and open platforms (see section above) that use third-party networks to handle the creation, targeting and distribution of native ads.

Landing Page Dirty from the Get-Go

Cybercriminals have been known to actually create an ad campaign with clean content and its corresponding landing page, then use content recommendation platforms to buy trac. Since the content is clean, it passes the vetting process. Then, once the campaign is successfully running, the cybercriminal activates the malicious code in the landing page to infect the user.

Often, the attacks are target-specic, for example, by geolocation or device. The landing page that was approved is still available and accessed by certain users, while other users, who t the cybercriminal’s prole, are directed to the malicious version of the landing page. For example, the cybercriminal decides that anyone coming from the United States or Canada with an iPhone 4 is ideal for infection. The native ad campaign will be clean for every user except those tting the targeting criteria. (See picture 1 below.) 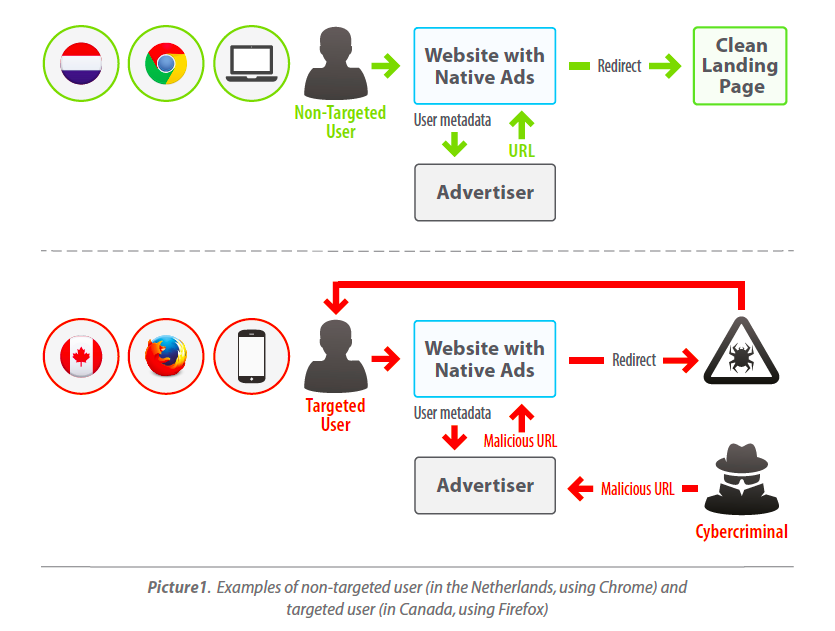 The ad tech industry is looking to perfect a more targeted, more robust, more intelligent solution for users. Native advertising, when properly protected and implemented with adequate disclosure and church-state separation, can be a powerful tool for publishers and brands. However, it’s important for publishers and native advertising platforms to fully understand the security implications. Post-click malware puts site visitors and end users at risk. The industry needs to take a closer look at native advertising and its parameters to make sure the next big malvertising attack doesn’t come from native. In the meanwhile, you can turn to GeoEdge to keep your site and your users protected.